Although he doesn't explicitly say it, one of Baudrillard's main metaphors that moves throughout the text is the stage magician. Baudrillard speaks of a loss of the "scene," which corresponds to the loss of the stage and the illusion. Perhaps one of the reasons we are less attracted to magic is because our lives are obscene. We have lost illusion so that the Real is left.

Bordering on cliche, stage magic revolves around an illusion maintained by a secret. This is codified (as a "rule" rather than a meaning) in the Magician's oath:

Thus, a pact is made to keep the secret of the illusion because if the illusion is revealed then the trick's effect is nullified. . .magic becomes banal (fatal becomes banal?). What once seemed a powerful spectacle (a kind of fetish) is reduced to a mechanical, rational explanation.

Illusion (as defined by Baudrillard): "an initiation to the rule, to the superior agreement and convention in which something other than the real is at stake" (211).

Baudrillard argues that what will eventually 'save us' is not rationality, but the "spectacle" (Baudrillard 225). However, can we get the scene back? Or must we look toward a new mode of seduction--fascination (more on that later).

For Baudrillard, as in magic tricks, the effect is all that matters. The secret is that the secret will not suddenly give the act more meaning. The magic trick is a signifier without a signified--it produces pure pleasure and jouissance--not meaning. It causes us to ask if we can "believe our eyes"--we want to believe it was "real"--we know that it is a 'trick', but its such a convincing one. We take pleasure in it because it does not deal in the Real.

The Prestige--loss of the scene

I must thank Steven L. and Jon T. for pointing me toward the film The Prestige, which dramatizes this loss of illusion and scene:


The plot of the Prestige is pretty complicated for a popular film. Its been awhile since I have seen it, but one of the events that one can see from the trailer above is that tricks 'go wrong' and the audience is horrified by the entry of the Real. The film centers around an alleged murder--a foreign topic of the magic stage where all is a play of appearances for our enjoyment.

But The Prestige also centers around the obsession with the secret of a trick that we "know" cannot be performed. The film keeps the viewer guessing until near the end where it is revealed that the one person who we know as Borden (Christian Bale's character) is actually he and his twin brother. Wikipedia summarizes it thus:

"Borden reveals that he was actually two identical twins who lived as Fallon and Alfred, alternating between each role. One twin (the one still alive) was the husband of Sarah and father to daughter Jess, and loved Sarah more than the magic; the other was in love with Olivia. They played one individual in life and in the illusions. Angier's method is also revealed: During the illusion, the machine created a duplicate of Angier, with one falling through a trap door into a locked tank and drowning, and the other being teleported to the balcony. Each tank contains a drowned Angier. Borden leaves Angier to die as a fire consumes the building. Afterwards, Cutter reunites Borden with his daughter"

Obviously, this "loss of the secret" results in a devestating, violent ending. Furthermore, once we figure out that the trick Borden performs is actually reality, we almost feel let down as an audience--it is unexpected and yet everything begins to make sense. This is the reason the secret must be contained for a magician. Again, in a useful phrasing, Wikipedia explains,

"Exposure is claimed to "kill" magic as an artform and transforms it into mere intellectual puzzles and riddles.[citation needed] It is argued that once the secret of a trick is revealed to a person, that one can no longer fully enjoy subsequent performances of that magic, as the amazement is missing.[citation needed] Sometimes the secret is so simple that the audience feels let down, and feels disappointed it was taken in so easily"

Though these comments are speculation, we can understand this in terms of the CATTt as an interaction of the Contrast and Theory. Once the secret is exposed, the magic becomes "mere intellectual puzzles and riddles" and that the "moment of amazement is missing." The trick loses its inhuman quality and dons mortal garb--the magician ceases to fascinate us (is magic seduction or fascination?). We revert to revealed strategies--the "game" loses any sense of game or play.

According to The Prestige, there are three parts to a magic trick. These three parts serve to, to point to Stiegler, 're-enchant' the world.

(now you're looking for the secret but you won't find it)

3. The Prestige--"this is the part where the twists and turns, where lives hang in the balance, and you see something shocking you've never seen before"

Baudrillard seems to call his readers to be illusionists, to be magicians. Instead of the Heideggerian search for the meaning of Being (in the early work primarily focused on the 'subject'; in the later work attempting to find the meaning of Being in itself), Baudrillard writes that our fundamental task consists of appearing and disappearing (213).

This takes us back to two paradigmatic children's games:

1. Fort-Da. While Freud interprets this game of fort-da as the "conjuration of a mother's absence," but Baudrillard takes it one step further, arguing "its also first of all a kind of ceremony, a control and mastery of appearance and disappearance" (212).

2. Peak-A-Boo--Though this game is not in the control of the child, we see here a fundamental example of appearance and disappearance--does the child really not see the face of the other, or is he/she merely pretending to not do so?

These examples also support Baudrillard's point that while we may think that child's play is free and spontaneous, it is actually the "charm of recurrence, of ritual, of meticulous unfolding, the invention of rules and complicity in observance, are what makes for the intensity and simplicity of child's play" (212).

Although at first I was skeptical, I begin to think about my own childhood games--how we would create a system of rules to follow. One of our favorite games involved shooting each other with nerf guns or even cap guns. We had to decide what would count as a "hit". Sometimes we'd argue over it "he's dead" --"no i'm not, that just touched my pantleg" "but i hit you" etc. etc. Kids care more for 'rules' (particularly if they are arbitrary than we give them credit for).


"The secret is made up of the annihilation of causes and the burial of ends in the organized order of appearances alone. The Rule of Appearances and Disappearances" (212). 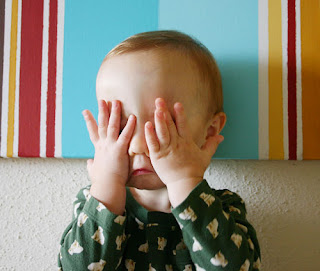