Warhol and the Absolute Commodity 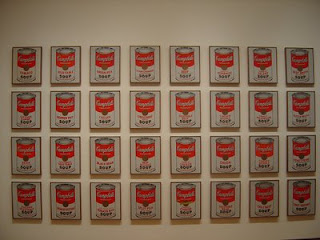 According Baudrillard, the absolute commodity, the pure object, is 'worthless'. The Band pointed out that in games money becomes a fetish object. While Baudrillard spends much time speaking of the loss of seduction as the loss of scene, he argues that the form of the commodity is a new form of seduction, the "vertigo of "obscenity," when artwork becomes monstrously foreign. In other words, the work of art becomes its 'circulation' and reproduction--"more commodity than commodity" (Baudrillard 147-149).

For me, and I'm sure several critics before me, Andy Warhol is the postmodern extension of Duchamp's spirit (if i can use such an anachronism). It took me a long time to 'get' Andy Warhol's art, but once I did I could never think of art as the same thing again. Warhol's art is the desire for the work of art to become its circulation. Furthermore, like Baudelaire before him, he sought to make of HIMSELF a commodity. One might even argue that Warhol is as much part of his art as what we consider his work.

But, of course, the same may be said of Jackson Pollock. And yet, there is a key difference in the way they go about it: Pollock makes of himself the absolute subject, Warhol makes of himself, the absolute object--the commodity. Warhol was known for his 'mysterious' behavior, Pollock was known through mythologies. Pollock embodied the American Male. Warhol was no such thing:


There is a way that his 'obscene' public appearance still enables him to keep his 'secret'--because there IS no secret. Andy Warhol is surface, object, commodity. We are 'fascinated' (not traditionally 'seduced') by Warhol. Warhol is not what Baudrillard calls a "vulgar seducer," but rather "puts himself before the other's gaze, makes of himself a fascinating object" (150-151).