In our final Prisoner's dilemma discussion over email, Ulmer mentioned that we might want to think about Von Neumann's relationship to poker as a potential frame for the contrast of the CATTt. Rather than throw away poker and contrast it to another game, I would like to point to the most common strategy of poker: deception. Poundstone writes, "Good poker players do not simply play the odds. They take into account the conclusion other players will draw from their actions and sometimes deceive other players" (40). Now, a person's ability to deceive is also related to his or or her ability to seduce, a key concept that I will elaborate on in my posts on Baudrillard. There are a couple different deceptive strategies. The most popular one, and the one that game theory is predicated on, is the "bluff." Bluffing occurs when you try to convince your opponents you have a better hand than you actually do. You bet high and take the risk in order to maximize your profit.

Poundstone points to the 'arms race' as an example of the US attempting to bluff by pretending to want to cooperate in an 'open skies plan'. Though some may disagree, it seems clear that "the administration may have been so confident that the Soviet's would never agree that they felt they could bluff and not be called on it [ . . .]" (188). So this 'bluff' didn't really work because the Soviet's did seem to agree at one point. It seems that the administration wanted to save face rather than admit they were the "sucker" who would try and cooperate. . .or perhaps they were determined to "not negotiate with [Soviets]" (as we are unwilling to negotiate with terrorists--we will return to the problem of terrorism in a further post on Baudrillard). 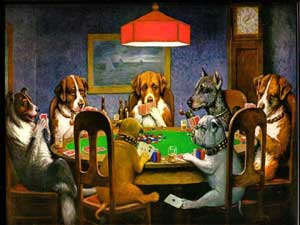 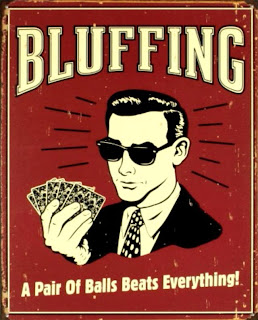