Correspondences, with 'regards' to Baudelaire 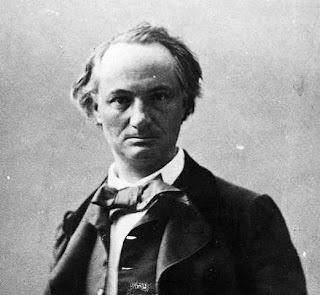 Nature is a temple, where the living
Columns sometimes breathe confusing speech;
Man Walks within these groves of symbols each
of which regards him as a kindred thing

As the long echoes, shadowy, profound
Heard from afar, blend in a unity,
Vast as the night, as sunlight's clarity
So perfumes, colors, sounds may correspond

Odours there are, fresh as a baby's skin,
Mellow as oboes, green as meadow grass,
--Others corrupted, rich, triumphant, full,

In our class discussions, the band pointed to the interesting meaning of 'looking' and 'regarding'. While there has been much criticism on the violence of looking and the gaze in film criticism, particularly related to gender studies. The Band seemed to point out a less intrusive gaze, a 'regarding' without analyzing, a tracing of the play of surfaces within things. John and I had a bit of a spat about the relevance of phenemenology, which indeed did seem related to 'regarding', but not to what I considered to be the gist of Baudrillard's text, which was about the object.

Luckily, Baudelaire lets us have it both ways, as he positions the object (Nature as a temple) as the 'regarder' of man: "Man walks within these groves of symbols each/of which regards him as a kindred thing." We can take this, indeed, as confirming a sort of phenomenological view of the world as an original unity of subject-object, which Descartes only later made the final split. However, we must take note that Nature here is not something to be be adored by man, but is 'kin' to him. This allows Baudelaire to distinguish himself from the Romantic period, as he moves into the Modern along with other important French Symbolists.

Nature is a symbol to man--it 'speaks' to man, but not as a primordial and ancient voice telling us our essence, but as a cipher, various written signs that address our senses "senses' rapture" rather than our interpretive mind. This allows for us to distinguish Baudelaire's view of nature from the view that Nature is the Book of the World--God's text to be read and deciphered. Baudelaire 'forgets' (in the sort of 'active forgetting' advocated by Nietzsche--indeed, losing oneself in the senses of the seductive object/woman is a frequent theme in Fleur de mal--see the poem "Lethe" among others) to interpret the signs, and participates in a synesthesiac heuretics--the senses and the soul, the mind and the body mingle in jouissance, an unspoken cooperation and correspondence.
Posted by Jtriley at 5:19 AM