In the following post, I explore the several different meanings and uses of the word "drag," which is the first word of the massive machine that demolishes mountains


Aerodynamics: Sometimes called "air resistance," refers to the forces that oppose an object moving through a fluid, a liquid or a gas.


Police Drag: "In some police departments a small dredge (sometimes called a drag) is used to find and recover objects and bodies from underwater. The bodies may be murder victims, or people who committed suicide by drowning, or victims of accidents. It is sometimes pulled by men walking on the bank" (Wikipedia--"dredge").

A Police Drag is a type of dredge, which is also a process (like Mountain Top Removal) that " creates spoils (excess material), which are carried away from the dredged area. Dredging can produce materials for land reclamation or other purposes (usually construction-related), and has also historically played a significant role in gold mining. Dredging can create disturbance in aquatic ecosystems, often with adverse impacts." ("Dredging").

Smoking: "Drag" is also used as a verb for cigarette smoking: "take a drag," thus leading us back to the possible carcinogens and harmful chemicals found in coal slurry.


Clothes: Ulmer made a joke about my site attracting the 'drag' community and I thought I would explore this uncanny connection. Particularly since we discussed the "counterforce" consisting of the cabaret, where all "law" or "deceny" was transgressed in a search for pleasure. "Drag" can be considered a search for that same kind of free pleasure, that "jouissance."

In the above performance, we can see that the "host" has some characteristics of the modern drag show. Though he is not in a dress, he has a certain androgyny about him. As he lifts his arms and dances with a bunch of women. There does not seem to be any difference between them. . .he is not the leader, but one of them. The cabaret is excessive--it is about EXPENDITURE, as we discussed with Bataille.
Is it possible that the 'drag show' is our modern equivalent? 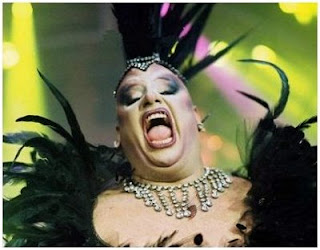 It may sound silly, it may sound "irrational," but--can we queer mountain top removal? Can we queer the "dragline." How can we transform the erect phallus that is fucking our mountains? 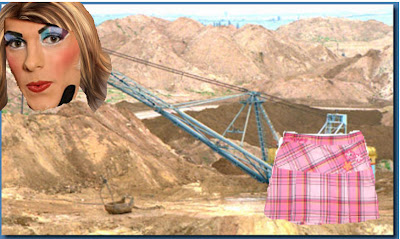