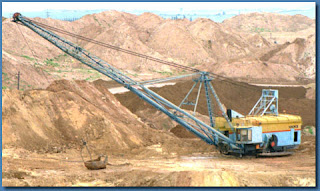 Welcome to a blog devoted to discovering a "Fatal Strategy" (no, i don't know what it is yet) to decide on policy formation regarding mountain top removal. The title of my blog refers to the giant machine (shown above). According to a newsletter on mountain top removal, the machines used can weigh up to 8 million pounds with a base as big as a gymnasium and as tall as a 20 story building. This is used to remove coal from the tops of blasted mountains. The drag line is so powerful that it takes a minimal amount of workers to operate it so that a small team of people can destroy an entire mountain.

A wikipedia article reveals that the dragline's power comes at the high cost of its limitations: "The primary limitations of draglines are their boom height and boom length, which limits where the dragline can dump the waste material." It is this limitation--built in to the very essence of the technology--that creates the accidents/disasters of coal slurry spills that have already occurred a second time. Because the drag line cannot move waste out of the area, both the solid and liquid waste from washing coal that is dumped into a sludge pond in the valleys of the mountains.


These spills from these ponds has resulted in death, wrecked homes, and poisoned water. As in the Martin County Sludge Spill, where 300 million gallons of sludge poured into two rivers in 2000.

According to the MJS newletter, the Massey Coal Company responsible for this second spill called it "an act of God"--denying that their action led to the possibility of disaster.


While this particular accident was 10 years ago, the OldSpeakJournal Blog has connected this event (and several potential disasters) to the recent issue of the BP oil spill:


"In 24 states across the country, coalfield citizens have been living with area watersheds contaminated by toxic coal slurry and coal ash for decades. Thousands of miles of streams have been jammed and sullied with coal waste from strip-mining and mountaintop removal operations" --OldSpeakJournal Blog

Although the BP oil spill has gotten lots of press (as the exxon Valdez did  when it happened--even though the Martin County spill dumped more), these disasters waiting to happen are largely ignored. One of the reasons for this might be that there is no "affective" image for something that might happen--only images of what happened elsewhere.

From what I have read, Massey Energy has "apologized" for the spill and has been fined lots of money for violation of the Clean Water Act (I read 20 million). However, it seems that in a utilitarian understanding of the disaster it is better to take this monetary hit than to stop what they are doing.


Recently, the EPA has taken a small step forward in stopping Mountain Top Removal by revoking a mining permit in West Virginia on January 14th, 2011. See the official press release.  The mining company is furious, arguing that this will "block an additional $250 million investment that would create 250 jobs" and that the obama EPA is taking a step backward in this time of recession. It seems that the company is trying to use the recession to justify their irreversible damage to the environment and, possibly, damage to more homes and people by poisoning the water.

But despite this step from the EPA, this is not a full scale stopping to the mining:

"The EPA is reviewing applications for about 80 other mining operations and has allowed some mountaintop projects to go forward. The agency also noted in a statement that it worked with a different mining company to reduce by half the impacts its operations would have on nearby streams.In January, 2010, Patriot Coal Corp. received a permit for an expansion of a mine in West Virginia. The EPA had held up that permit for evaluation on whether surface mining operations pollute local water.

The EPA, in its announcement of the Arch decision, also expressed support for coal. "Coal and coal mining are part of our nation's energy future and EPA has worked with companies to design mining operations that adequately protect our nation's waters," EPA Assistant Administrator for Water Peter S. Silva said in a written statement"


Thus, we arrive at a problem: surface mining creates jobs and coal is considered crucial to our nation's energy. As much as the environmentalists want all mountain top removal to stop, it seems that it is a bit more complicated than that. This brings me to a questioning of my own task: how could a "fatal strategy" solve this issue?

I am a bit confused on exactly what I am trying to do here. Are we trying to theoretically justify stopping something so that the accident doesn't occur? Or are we looking for a different solution? To end up at the end of this project with basically the strategy that we need to stop mountain top removal because it is destroying our mountains and harming people seems equivalent to the banal activism that doesn't seem to be getting the nation's attention. We all know that the company needs to consider profit and jobs and so my protesting that these values are not what we should focus on doesn't seem like it would help all that much.

Still, I suppose that I need to have faith that there can be something done about these accidents that occur because of surface mining. I think I still need to learn more about surface mining and the complications (not juts from activist groups, but from the news and perhaps even the company's perspective), but then its hard to sort through all this information while also thinking fatally.

For now, here is another youtube video that shows more damage done by the sludge spills.