In my last post, I was discussing Maurice Merleau-Ponty's understanding of 'depth'. I would like to try and look at my own attempts at finding an abstract 'image' or form from my disaster. I attempted to created depth not by use of linear perspective, but by layering images one on top of the other until, hopefully, the images converged into one.


Pictures
I began with this picture of coal sludge. I "liked" it (of course I don't really like what it is) because the coal sludge doesn't look like what we would normally call "coal," but like a glassy volcanic material. I though the veins and big bubble at the bottom really evoked the kind of sludgy slurry that would ooze out of the mountains and into the river. Indeed, the slurry itself looks like it has taken the form of a river.


Next, I decided that I would take the piece of the picture that was bubbling over toward the middle bottom and make that an abstract square of photo. I then started to play with filters to see how I could alter the sludge while still maintaining some of its qualities that seemed to embody the event. Luckily, I ran across the "ripple" effect, which turned the sludge picture into something that resembles the after effects of mountain top removal. I thought that it was conceptually interesting to merge the 'effect' or the 'accident' of surface mining with the surface mining itself in this image. So I found a picture of the mountains and started playing with layering. I came up with these two images. 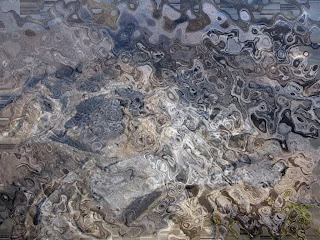 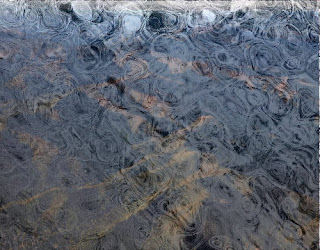 I like the first one of these 'better' because I think that it forms into a 2-dimensional (and yet not without depth) abstract pattern that seems to get at the destruction done to the area. You can't really tell that there are mountains in the picture, but you get the sense that the 'background' (though its hard to distinguish between the background and foreground) has been covered over with some sticky substance, destroying it.

Finally, I decided to try and overlay the small sludge photo with the picture of the mountains, this time in black and white--to see if I couldn't get at once a "purer" abstract form and yet signify the sludge with more force: 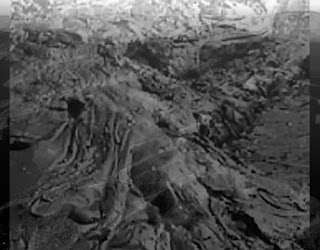 I actually like this image the best because it maintains a more '3-d' quality that suggests that things are getting lava or some substance all over it. I think it is because the bubble makes it pop out as if it were a mountain.

The other abstract form that i thought might work well would be the form of a crater on the moon. I'm not sure though. Still working it out.