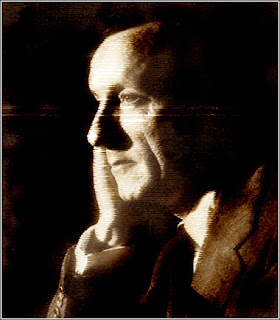 After listening to Ulmer talk about the importance of abstract/avant-garde art for our class, and his mention of Merleau-Ponty--I thought that it would be interesting to re-read his "Eye and Mind" essay, which discusses his views on painting as a kind of analogy for how vision works. MP, as Ulmer said, was an important French phenomenologist and a contemporary (and in some sense rival) of Jean-Paul Sartre. However, Merleau-Ponty was also very interested in gestalt psychology and throughout his career maintained not only an interest but an active engagement with thinkers in the social sciences and other humanistic disciplines
In a way, Merleau-Ponty seems to be trying to find a different kind of metaphysics--just as we are trying to do with the accident. He contrasts (and yet draws upon) Descartes conceptions of space and the artwork that he chooses to analyze: copper engraved paintings. MP writes that "any theory of painting is a metaphysics" (Merleau Ponty 171). For Descartes, "pictures" are conceived mainly in terms of line drawings that, like the copper engravings, "preserve the forms of objects [. . .] present the object by its outside or its envelope" (172). As Ulmer mentioned before, MP contrasts this way of thinking of 'pictures' with 'secondary qualities' like color. Although he clearly says that color is not a key to painting's metaphysics. Indeed, he argues that "lines" can also give a sense of 'depth' to a painting. Particularly Matisse, who though will still put in what MP calls the "prosaic" dimension of the line but also the "hidden operation which composes in it such softness or inertia and such forces as are required to constitute it as nude, as face, as flower" (MP 184).
Thus, Merleau-Ponty attempts to get at a kind of poetic understanding of the concept 'depth'. Depth uses to be understood as the trick of the eye technique of the Renaissance painters. MP argues that though this technique was not more artificial than the others, the painters mistakenly thought that this was the final achievement of painting. Instead, he looks for a visible that suggests the invisible: "the proper essence o the visible is to have a layer of invisibility in the strict sense, which it makes present as a certain absence" (187).
I think that we too should attempt in our 'paintings' to indicate an invisible layer of depth that has nothing to do with a representation of depth perception, but everything to do with drawing the viewer in. MP's description of the painting may give us a poetic attitude/mood to inhabit while we work with even our digital photographs: "The actions most proper to him [the painter]. . .to him seem to emanate from the things themselves, like the patterns of the constellations. Inevitably the roles between him and the visible are reversed. that is why so many paintings have said that things look at them" (MP 167, my italics). This notion of reversibility will return when we get to Baudrillard, but for now I want to argue that this is another way of forming the event as a sign that we do not explain, but that 'explains us'. As Merleau-Ponty puts it,  "the question comes from one who does not know, and it is addressed to a vision, a seeing which knows everything and which we do not make, for it makes itself in us" (MP 167). Thus we are not meant to look at the event as an 'interpreter', but as a painter who is responding to the event in light that we believe it can give us an aesthetic explanation.